On Friday the 4th of November in Tarxien, Malta, the annual General Assembly took place. All members, volunteers and employees were invited to attend. It was an opportunity for the members to meet once again, in such numbers, after a pause of 2 years of physical activities due to the pandemic.

The General Assembly started at 6pm with an active introduction prepared by ŻAK members, who volunteered in Botswana this summer. After this, a video message to the members prepared by the Archbishop was presented. He mentioned how the theme chosen for this year centers around Jesus, that he is the way, the truth and the life. In his message, the Archbishop encouraged the members to keep Jesus in their midst, in everything they say and do. He thanked them for the service they are giving, as well as the formation meetings they organise regularly. All this helps us to discover the face of Christ. 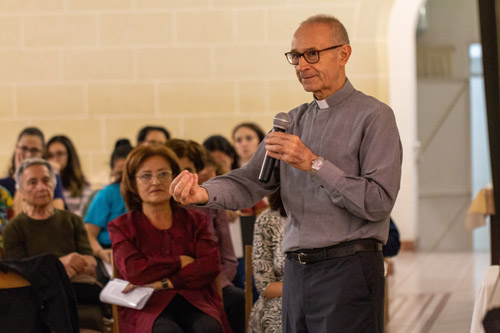 Fr. Frans Abdilla, the spiritual director for the Maltese Catholic Action continued to delve into the theme and he compared the way with the role models we choose to follow and inspire us, the truth with the Word of God and Jesus’ attitude and he also mentioned the importance of a full and meaningful life. His words led the participants to the workshops, where the participants were divided in five groups and in these smaller groups they read a Bible excerpt and answered a number of questions about it. The groups discussed points such as, what struck them the most from Jesus’ attitudes in that piece, what would be their attitude in such a situation, how they confront their challenges and difficult moments and which attitudes they need to work harder on.

After the workshops the previous Board members of the Maltese Catholic Action were thanked for their work and were given a small gift. The introduction of the new Board members for the coming three years was also made.

The programme continued with Marija Cachia, the President of the Maltese Catholic Action for 2022-2025 addressing the members, where she mentioned that the challenges we face can make us lose hope, because we think they are too big for us to overcome, but this is where the verse from the Gospel according to St. John, which will accompany the members during this year becomes clear. Jesus reminds us; “do not let your hearts be troubled“.

Marija continued to explain how it is easy for us to be confused when we are swimming upstream, in a society that aims to keep us constantly entertained, or when scandals and corruption originate not only from outside of the Church but emerge also from within it, when the role models we look up to let us down. She also mentioned instances within the Catholic Action that also make us lose hope, such as when groups close down, when numbers dwindle or when members leave.

Marija mentioned how those who came before us can be of help. Pope Francis has stated numerous times that the Catholic Action is lucky to have so many stories of faith and holiness amongst its members. As an organisation, the Maltese Catholic Action would like to continue to discover these saints and therefore each year we will be getting to know a Saint even more. For this year, on the 100th anniversary of her birth we will be looking at Saint Gianna Beretta Molla. Saint Gianna, a woman who received her formation from the Catholic Action and lived her vocation as a doctor and a mother, received a revelation from Christ.

For the closing of the event, there was a moment of prayer prepared by Fr Reuben Gauci and Mary Anne Muscat, the Vice President of the Catholic Action, in the presence of the relic of Saint Gianna Beretta Molla, which was lent for the event by the Catholic Action in Gozo.