The Association must restate, in a faithful, firm and original way, the primary importance of prayer, of the daily struggle to be faithful to one’s Baptismal consecration, to chastity according to one’s own state of life, to an availability to virginal consecration and to a service to one’s brethren for those who are called, to the giving of testimony through one’s private and public life in the different and very often difficult everyday life situations. In short, we could say that: the Italian Catholic Action should be a school of sanctity, following the track of so many men and women, young people and children, who, in the programme «prayer, action and sacrifice» , have found the way as to how they could be generously and even heroically faithful to the Lord. (Paul VI, 25 April 1977)

You have come to Rome in the spiritual company of your numerous Saints, Blessed, Venerable and Servants of God: men and women, young people and children, educators and priest assistants, rich in Christian virtues, who have grown up in the ranks of Catholic Action which is celebrating its 140th anniversary in these days. The magnificent crown of faces that symbolically embraces St Peter’s Square is a tangible witness of a holiness rich in light and love. These witnesses, who followed Jesus with all their strength, who spared no efforts for the Church and for the Kingdom of God, represent your most authentic identity card. Is it not still possible today for you boys and girls, young people and adults, to make your life a witness of communion with the Lord that is transformed into a genuine masterpiece of holiness? Is this not your Association’s purpose? (Benedict XVI, 4 May 2008)


THE PEDAGOGY OF SANCTITY. A universal challenge for lay faithful •documents available •photogallery day by day 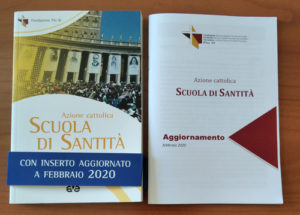